Guided by frames, both literally and philosophically, Pathik Shah Villa makes a strong visual statement despite blending seamlessly with the surrounding landscapes.

A bare trapezoidal patch of land sitting amidst villas and offering no views would barely get acknowledged by the common eye. But KNS Architects and architect Kanhai Gandhi had other ideas. For them, this site nested amongst dense greenery became a source of inspiration and a starting point for their next project.

The volumes, robust yet clean, were receded from the entry. This led to a large garden opening up which not only strengthened the perception level of the house but also tackled the visual and climatic challenges of the site.

“The frame is not just a façade treatment. It is also contextual and brings human scale to the entire project. The frame is like a second skin to the project” – Ar. Kanhai Gandhi

Derived from a basic ‘plus’ grid, the architects maintained simplicity and geometric volumes throughout the design process, which translated both outside and inside through visual connections, block placement, as well as movement within spaces, like a well-oiled machine.

Designed on the principles of Vaastu, spaces in this home are strategized and finished to primarily control harsh climatic conditions without compromising on natural light. Resting spaces face the edge with the dense canopy of trees, as they aid in cooling the building, amongst other passive design strategies Kanhai describes in detail. The axes and divisions separating the rooms are converted into transitional spaces, or light shafts as they are commonly known in Ahmedabad. This brings in light and ventilation as well as cuts out the heat in the rooms within, amongst several other advantages.

The clients desired a house that was not only environment friendly, but also simple and easy to maintain. The right choice of materials became an important factor here. A monochrome colour palette was used throughout the house, which when combined with white, made the exterior volumes look large and the interiors spacious. Earthy textures and shades complimented this muted colour palette to introduce warmth to the spaces.

The two primary axes of Pathik Shah Villa manifest into multipurpose transition spaces and light shafts. They add relief to the built mass of the house without compromising on internal space, as opposed to larger central courtyards. These light shafts bring in natural light and cut off the harsh Ahmedabad heat, so the house remains cool and airy throughout. Due to axes cutting through the house in all 4 directions, there is ample cross ventilation, reducing the cooling load of an air conditioner. Ar. Kanhai stands in and around these transition spaces to show and explain the details behind them.

Guests walking in the linear corridors led by straight lines are suddenly greeted by a sculptural element extending upwards in a double-heighted space. The staircase departs from the vocabulary of the house and organically curves, adding an element of contrast and surprise to the space. This staircase compliments and highlights the geometric rooms further. It also frames Ar. Kanhai who is sat on the steps, explaining the materiality and elements of the ornamental staircase.

One of the most interesting spaces of the house was a playful room for the daughters, called the Theme Room. This also departs from the typical vocabulary of the house, but in terms of elements and colours. Bright colours and fantasy elements give a childhood characteristic to this space. The harsh weather conditions of Ahmedabad also meant an emphasis on this indoor playful space for the daughters, elaborated further by the architect.

The residence is very elaborate in its concept as well as physical existence. It is a canvas made up of layers of ‘frames’, from micro objects to macro elements. Every single element in the house contributes to comfortable living, offering passive design solutions to tackle the extreme climatic conditions of Ahmedabad. This becomes a core contribution to the luxuriousness of the house, outside of the materialistic. Together, these spaces and elements coexist to form a cool haven in an ecosystem between the built and the natural, in the centre of Ahmedabad.

To watch the full video of Pathik Shah Villa and access a detailed E-Book of the project, visit here.

(E-Book GIF to be added)

To explore more amazing home designs in India, you can now visit our Website 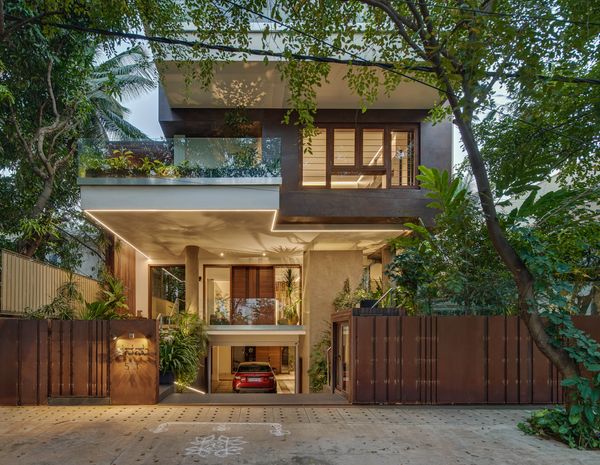 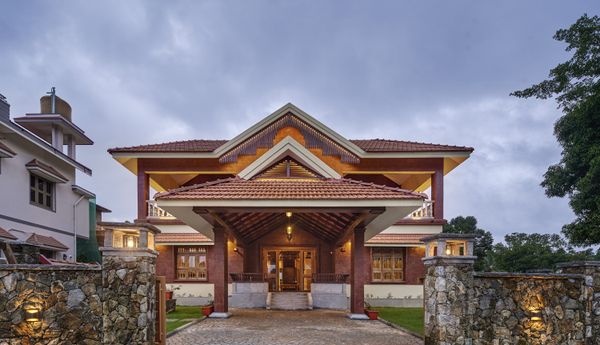